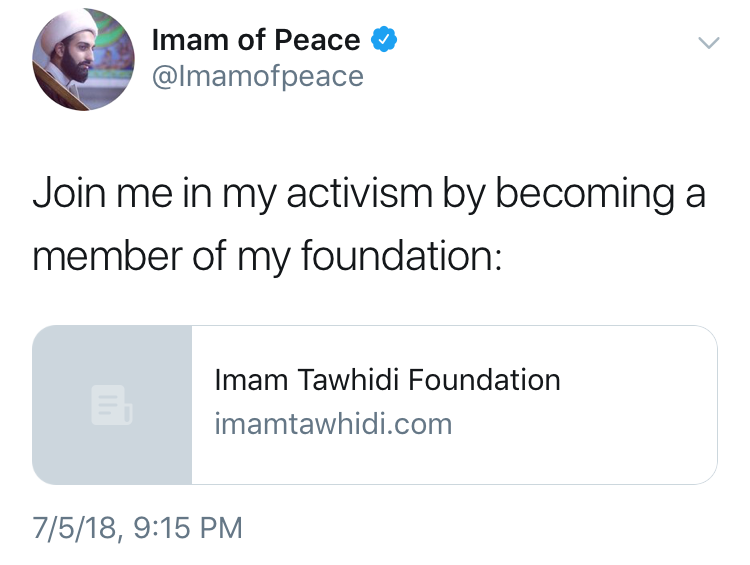 In February of 2016, Mohammad Tawhidi established the Islamic Association of South Australia, an organization in Adelaide that according to Sayid Sadiq Shirazi’s website, follows the directives of Shirazi. While the press release that states such has since been deleted from Shirazi’s official website, it remains on Shirazi’s Facebook page and is archived in the Wayback Machine. Click here to read the full text of Shirazi’s medieval, barbaric, sharia directives that the Islamic Association of South Australia follows.

After Shirazi gained notoriety and people began to realize that Shirazi endorses the marriage of nine year old girls, honor killings, FGM, death for apostates, and a host of other horrific ideas, the press release was deleted from Shirazi’s website and Tawhidi publicly declared he was leaving the Islamic Association of South Australia (IAOSA). While Tawhidi is yet to condemn Shirazi for his vile ideas, Tawhidi announced in July 2017 that he was done with the IAOSA and has since used the fact that he left IAOSA as “evidence” that he is no longer affiliated with Sayid Sadiq Shirazi.

Tawhidi’s July 2017 announcement indicated the “first branch” of the Imam Tawhidi Foundation (that operates under the directives of Sayid Sadiq Shirazi) would be in Adelaide. Does that mean additional branches will pop up elsewhere? Here’s a look at some of the barbaric ideas that may be coming to a town year you, and here is a link to the full text.

Rumor has it Tawhidi is still taking donations if you’d like to support his misogynistic death cult of pedophilia and self-mutilation! #NoThanks!

Just a quick question, @ImamofPeace …did you “leave behind” the Islamic Association of South Australia? Or did you just change its name?

Does your organization still follow the horrific directives of Sayid Sadiq Shirazi? @ImamofPeace

@ImamofPeace I’m not seeing that you have denounced Sayid Sadiq Shirazi for his horrific ideas. He condones child marriage. Is he an ideological terrorist whom we all should condemn?