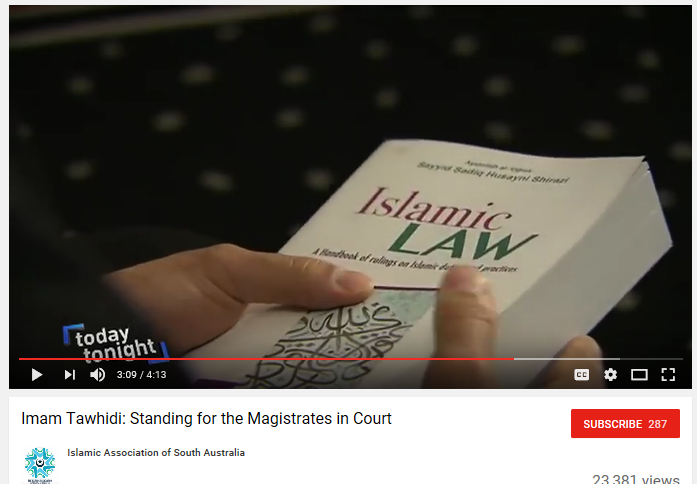 In May of 2016, Imam Tawhidi was “gifting” an Islamic law book to Australians that was written by his teacher and mentor, Sayid Sadiq Shirazi. Tawhidi has quickly gained attention for his outlandish statements that are difficult to ignore.  As demonstrative as Tawhidi is with his inflammatory statements about Islam, what speaks the loudest are the words he has not said; “I am morally outraged by Sayid Sadiq Shirazi’s teachings on child marriage, female genital mutilation, the need to implement Sharia Law across the globe, and his abhorrent misogyny that treats women as second class citizens.”  Why is Tawhidi condemning others for the exact same vile fatwas found in the book he was distributing? Tawhidi has not condemned Shirazi for his heinous ideas that must be defeated, rather he continues to promote Shirazi while lying about what the book actually says.  Tawhidi can also be seen promoting the book in this television interview (see minute 3:09).

“It is desirable (mostahab) to encourage early marriage of the girl who has reached the adolescence age.”

It is imperative that the leaders who deal with the affairs of the youth facilitate the marriage of the youth at an early age. It is imperative to obliterate those practices and customs that hinder marriage, such as high and excessive dowries, grand ceremonies that are normally beyond the reach of most youth. Furthermore, other marriage hindrances, or excuses for its delay, which counter the natural disposition of the individual, should be ignored; these include [university] education, or military service, or that ‘one has not prepared himself yet.’”

The book also condones female genital mutilation, and polygamy.  It instructs women to ask their husband’s permission before leaving the home in order to not deprive him of his “right” to have sex at his beckon call, and explicitly states “men are in charge of women.”  While women are given the right to work (per the approval of her husband, and assuming it does not interfere with her “shari’ah defined duties that she is bound to”), women are to receive half the pay they are entitled to.  While the face veil is “recommended and encouraged” at all times, it is mandatory if the face “attracted attention.”  Tawhidi gives the impression that he opposes all of this barbarism, but will not utter a single criticism towards Shirazi for his grotesque teachings that Tawhidi actively promotes.  Perhaps this anomaly presents an opportune time to explain that according to Shirazi, “taqiyyah is obligatory,” as the book reads:

“Taqiyyah is not hypocrisy; rather, it is the opposite of hypocrisy.  This is because hypocrisy is to hide disbelief and pretend Islam, whereas taqiyyah is to pretend disbelief and suchlike and hide faithfulness.”

Tawhidi epitomizes the concept of taqiyyah, as he hides his faithfulness to Shirazi’s brand of Islam by pretending to reject the vile practices through his condemnation of others.

Men are in charge of women… 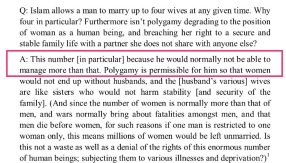 A man may have up to four wives

According to the book that Tawhidi was distributing, practices should be “obliderated” that prohibit youth from marrying

A statement that should not be followed by an “exception” #Misogyny

Women earn half the wage they are entitled to

A girl has reached adolescence at the age of 9

Imam Tawhidi blames Saudi Arabia and Wahhabism (an offshoot of Sunni Islam) for the violence and bloodshed that is occurring across the globe.  He passes the sectarian litmus test by frequently voicing his opposition to the Iranian regime, and has cited his affiliation with the Shirazi jurisdiction as evidence that he does in fact oppose Iran. Herein lies the problem in that Shirazi and his followers are not bona fide opposition to Iran, rather the Shirazi jurisdiction resents the fact that their brand of Islamic government (Shurat al-Faqih, or multiple Muslim leaders who govern based on the Quran) was not implemented during the Iranian Revolution. To Shirazi’s dismay, Iran implemented the system that is still in tact today, Wilayat al-Faqih, or a nation governed by the Quran and a single Muslim ruler. Shirazi’s preferred government is by no means less atrocious, rather the primary difference is the number of Muslim men who are in charge.  Ironically, Tawhidi passes the sectarian litmus test by following a scholar who is arguably the “most” sectarian. 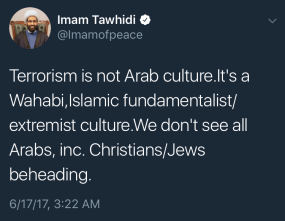 Tawhidi frequently criticizes ISIS (Sunni) for their abhorrent treatment of homosexuals, however Shirazi agrees that homosexuality is one of the severest types of haram.  He blames the Sunni sect for female genital mutilation (see image below), ignoring the fact that Shirazi has endorsed it, and he condemns both Iran and Wahhabism for condoning child marriage without mentioning Shirazi’s belief that a girl is ready for marriage at the age of nine (see Shirazi’s fatwas shown previously).

Tawhidi recently told the Secular Jihadists during their interview that Shirazi is “open to the West.” Shirazi’s book contradicts this assertion, as it dictates guidelines for avoiding the “corruption” of the western world.  The section titled “Forbidding Evil” specifically prohibits “acting upon western or eastern systems” (see images below).  Regarding political parties, the book states:

There is no objection to political parties in the Islamic sense and not in the western sense.   If these parties are the first step for the creation of an assembly for the implementation of the rulings of the Islamic Shari’ah [then there is no objection], but the parties that form parliaments to bring in new legislation [contrary to the teachings of Islam] then they are not [approved of].  This is because legislation of laws is specific to Allah Almighty

Manage the youth so they stay away from western political parties

Haram, as it can be found in the West sometimes

Political parties are an acceptable first step towards Shari’ah

Given that Tawhidi hangs a large portrait of Shirazi in his office, and his private Instagram account (catered to his fellow Shirazi followers) is adorned with photos, quotes, and fatwas issued by Shirazi, Tawhidi is likely practicing his obligatory use of taqiyyah when he tells non-Muslims exactly what he thinks they want to hear.  In the ultimate display of obedience, Tawhidi has gone so far as to kiss the feet of Shirazi. 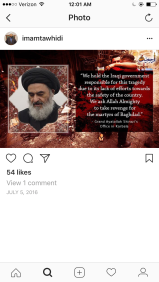 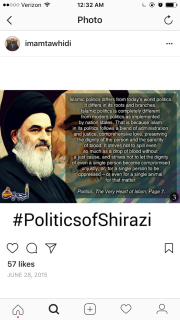 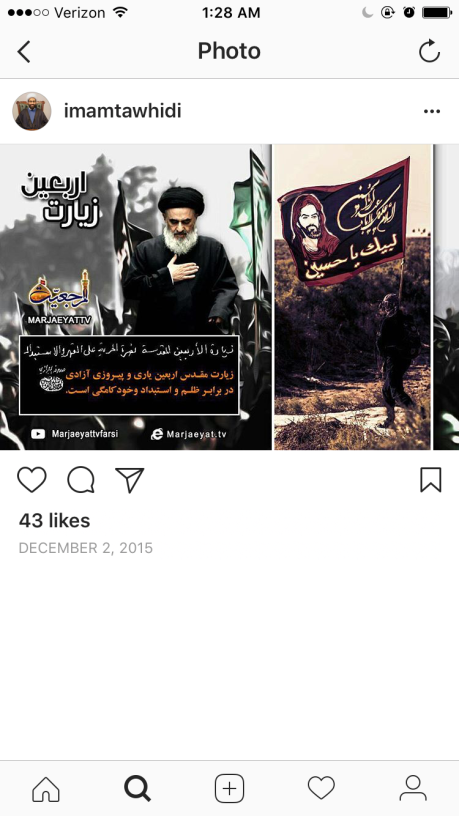 Tawhidi condemns “Islamic governments,” but according to Tawhidi’s Facebook post below, “there is not one Islamic country left.”  This statement in conjunction with his refusal to condemn Shirazi allude to the notion that he is against Islamic governments in their current form, and what people perceive as condemnations of ideas are actually manipulative condemnations of those (Saudi Arabia and Iran) who implement them (incorrectly).

On the Secular Jihadist podcast (go to minute 1:21:13) where Tawhidi grossly misrepresented Shirazi’s sentiment towards the west, Tawhidi was asked about Tatbir, the gruesome ritual where certain Shia Muslims (Shirazi recommends the practice) strike themselves in the head with a sword until blood gushes out.  Given the barbarity and gruesomeness of the practice, many Shia Muslims are repulsed by it, and do not participate.  When asked, Tawhidi stated he didn’t want to offend anyone (most likely Shirazi and his followers) by criticizing something sacred, so he drew a “redline,” and wouldn’t discuss it.  That seems like a peculiar place to draw a red line, especially for a man who most likely offended all Muslims when he called the Prophet Muhammad a “pedophile terrorist.”

On the inexplicably rare occasion that Tawhidi is questioned about his relationship with Shirazi, he immediately begins to downplay the relationship just as he did with the Secular Jihadists. Tawhidi says “he was my teacher, and it means nothing.”  He diverts, changes the subject, and does mental gymnastics that are disorienting.  Tawhidi was asked point blank if he would like to share any “major disagreements” he has with Shirazi, and with his tail between his legs, Tawhidi responded “I am not on his level of education in Islam to clash with him ideologically.”

Tawhidi had infinite options.  He could’ve sugar-coated a condemnation of the pedophilia and misogynistic barbarism that Shirazi condones with the same ease that he sugar-coats Shirazi’s anti-western views, or he could’ve expressed the same moral outrage towards Shirazi’s teachings that he expresses towards others.  He could’ve done anything in between, but instead Tawhidi chose to draw another redline in opting to patronize Shirazi for his “knowledge,” and completely bypass the question.  If Shirazi WAS his teacher, and it truly “means nothing,” then condemning Shirazi’s hideous teachings wouldn’t be a problem.  Why is Tawhidi creating the illusion that Shirazi is open to the west if he is not trying to minimize our opposition to Shirazi’s ways?  It is obvious that Tawhidi greatly admires Sayid Sadiq Shirazi, and downplaying the significance of their relationship is the epitome of the taqiyyah that Shirazi has made obligatory.  The fact is that Tawhidi equates Shirazi to “the Pope. 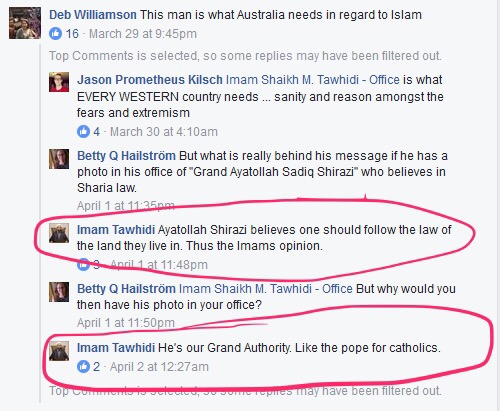 While the sectarian dynamics may be somewhat difficult to initially comprehend, there is one final tidbit of information that is self-explanatory, and it explains Tawhidi’s diversions and mental gymnastics; On December 25, 2015, Imam Tawhidi released an “open letter to the public” in which he apologizes for the hateful things he has said over the past decade, acknowledging that those statements made by Brother Tawhidi were in fact him. He indicates 2016 will be a big year for him, he will be present in the media, and he will be taking a change of course per the orders of his Marja Taqlid, Sayid Sadiq Shirazi.  Tawhidi states his “mission is an ideological one,” but makes no mention of Australia.  Contrarily, he states his actions will be in order to “serve Ahlullbayt (a.s) with greater excellence and quality.”  By Tawhidi’s own admission, he is working for Shirazi, and that is why Tawhidi will not condemn Shirazi’s vile ideas. 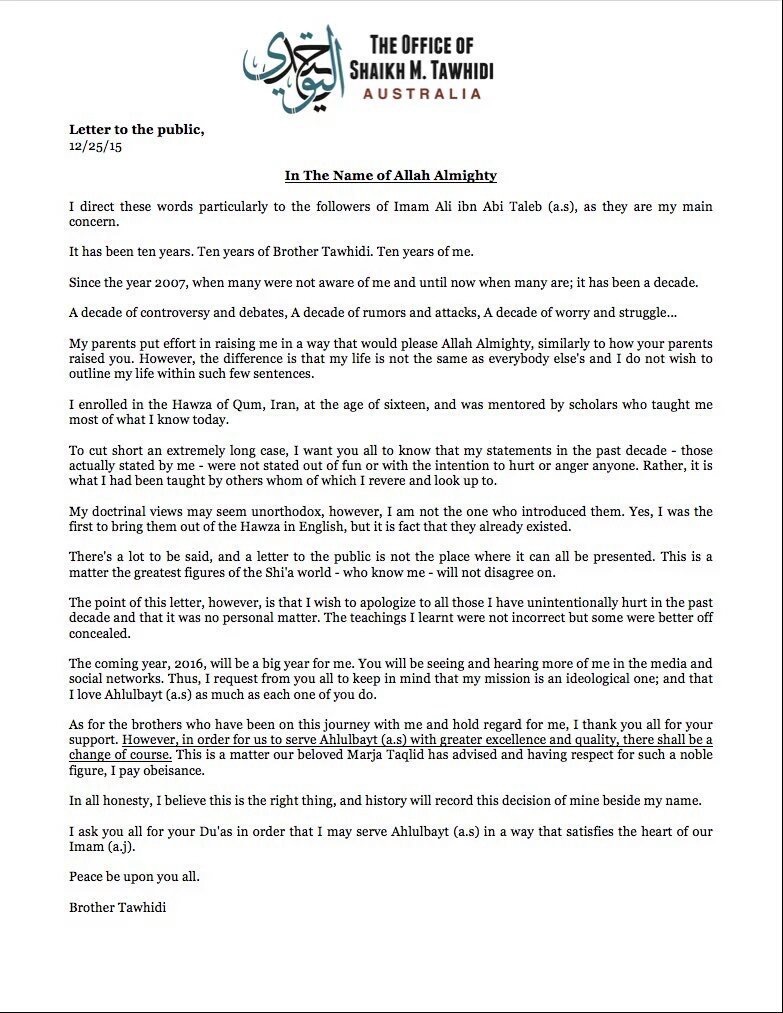 As I prepare to publish this post, I want all four of you reading it to know that I whole-heartedly understand why Tawhidi is receiving such an inordinate amount of attention.  I’m reading messages sent to him on social media, and people are telling him he’s brought them hope, that he is light in the darkness.  As a mother of two young children, I understand the fear over the current state of affairs in the world we live.  People are being massacred across the globe in the sickest of ways, and the recent Manchester attack where a nail bomb was detonated at a concert full of children made it crystal clear that there are no limits to what these deranged animals will do.

After several months of positive communication with Tawhidi on social media, I made this post on his Facebook page expressing my concerns.  Rather than address the issues I presented, my post was deleted when he banned me from his page.  Tawhidi can get away with silencing those who question him because for every one person challenging him, there are thousands who’d rather blindly believe that Tawhidi is the answer we’re desperate to find.  Tawhidi is far from that, as he is merely using our fear and despair to serve an agenda he is yet to disclose.  I am optimistic that people will eventually catch on, and start to question him.  Tawhidi can only silence so many people before he is forced to either address our concerns, or lose the support of those who have already bought into his deception. 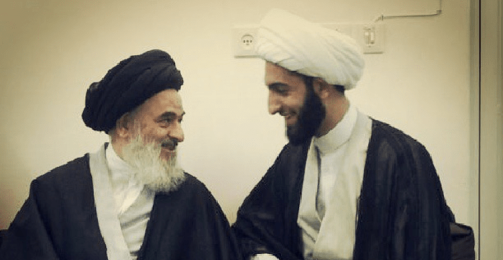